The Higher Performance of Two-Part Roof Coatings ‘Winning’ Over One-Part. 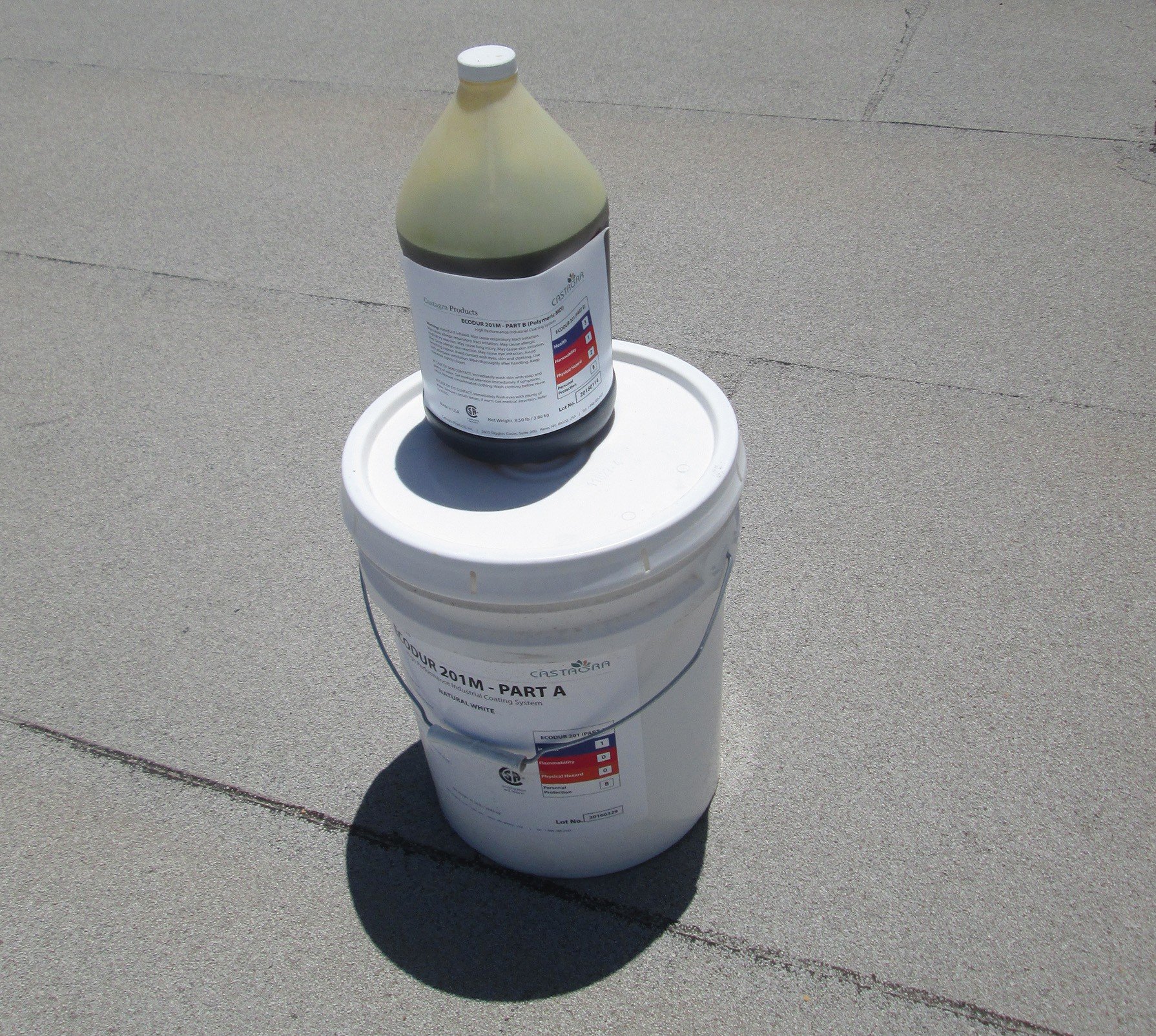 “This is leading to the recognition that two-part coatings provide the best performance over one-part and probably for the foreseeable future. It’s very much to do with the complex chemistry interactions in the final combination at the time of application.

“In our case, this is very much how it is with Ecodur where the complex fatty acids result in the phenomenal strength, flexibility, chemical and UV resistance, and ability of it to bond to original Ecodur surfaces years later should repairs or re-coats be done.”

Roosen said that in the 28 years since the veggie-plastic was first invented, the fundamental process of two-part combination remains the cornerstone for maximum performance, including the adhesion levels of nearly triple most conventional coatings.

“While it is a somewhat more involved to apply Ecodur than a one-part, the performance gain is so phenomenal as to vastly outweigh the small extra mixing effort. It’s still mop and bucket application for flat roofs, but it is also sprayable and foamable, giving professional applicators the right coating for all and any potential opportunities they could encounter.

“Most recently where we are scoring big is in bleed blocking, particularly on hard to coat surfaces such as asphalt and cementitious. We are being told that, at the end of the day, we have the only product that really works.

“If the flat roof has a white cool coat, its reflectivity can and often is, ruined by bleed through. I see no slowing down for cool roof coatings and Ecodur gives acrylics an silicones that extra adhesion that is so critical for long life,” commented Roosen.

Ecodur is made from renewable castor oil and naturally occurring soft rock gypsum. It is VOC-free, BPA-free, and free of solvents. It is certified for contact with drinking water.

“It is has and continues to be used in the oil and gas industry where they take a very conservative and cautious approach to protective coatings as the downside of failure can be disastrous given the toxicity and corrosiveness of fracking chemicals that end up in production water, posing a potential threat to groundwater should tanks fail.

“To date well over 1,000 small and large tanks have been coated and the Ecodur coatings have performed far better than conventional ones.”

Roosen concluded: “Two-part’s winning. We all know a cake made from scratch with fresh eggs, milk and flour etcetera beats out one out of a packet every time. It’s just the same with Ecodur; fresh vegetable oil combined with gypsum powder produces the best coating ever, a polymerized rock with all the natural high performance that results in.”

Castagra Products Inc., has its registered office in Reno, Nevada, USA, and headquarters in Phoenix, Arizona. It has its main toll production facility in Houston in Texas. The company is focussed on providing ultra-protective VOC-free, BPA-free, non-toxic coatings for roofing, flooring, water and waste water industries and oil, gas, frac production water storage tanks and pipes.