Coating a Tar and Gravel Roof with No Spudding 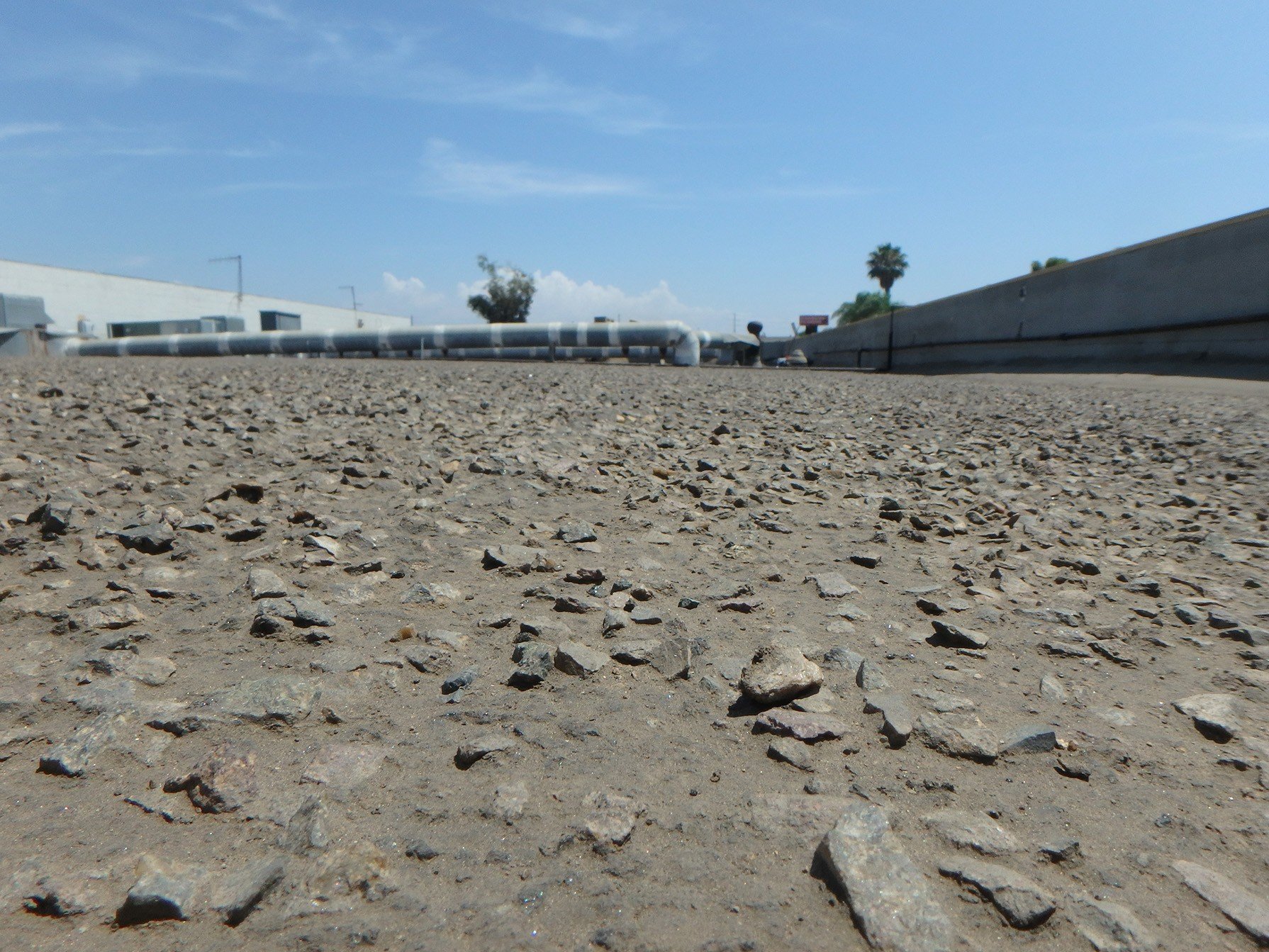 Vigorous spudding can do more harm than good, especially with fragile substrates such as those often encountered with tar and gravel roofs.

Roofers are very familiar with the long-handled tool with a stiff flat blade on one end (usually 4″ or 6″ wide) that is used to scrape and remove the top surfacing of a roof down to the membrane. There are also some very powerful mechanical spudders.

It takes an experienced hand to know just how much pressure to apply with the blade so as to avoid or, at least, minimize damage to the base layer.

If over zealously done substrate will be fractured or even break off. The aim, generally, is to expose it gently and sweep away excess particles for a liquid coating, or, in the case of a membrane application, to pretty well have it pristine so no air pockets will be trapped.

That, simplistically, is the traditional way, and it can leave subsequent acrylic and silicone topcoats highly vulnerable to trapped moisture, leading to significant loss of adhesion and early failure, because, inevitably, the anomalies such as cracks, holes, and gaps remain improperly sealed.

This is where Ecodur, with its near-triple adhesion and ability to self-level and fill substrate risk areas, comes into full play. It works perfectly well with tar and gravel and asphalt roofs which have been lightly prepared, leaving sufficient gravel for instance, to provide a surface with plenty of traction from the roughness of the remaining gravel (see photo).

Jef McCurdy, of San Diego Roofing, is a highly experienced roofing contractor, and he recently encountered a tar and gravel roof coating in the city which was at the end of its service life and exemplified the type of acute challenges that can be presented.

NO SPUDDING WITH ECODUR, BUT…

“In this project, we were able to prove that Ecodur can get the job done without spudding. However, I would definitely not recommend it unless there were circumstances that made spudding impossible.

“In this case, whatever cost we saved in not spudding was easily spent on labor due to the extra amount of cleaning it required. Each pass with the power broom loosened new rocks, which made the task of cleaning seem endless,” commented McCurdy.

“On a project this size, over 10K square feet, we would typically mechanically spud. However, after multiple small-scale tests, it was time to throw Ecodur a nearly impossible project. Where this roof really exemplifies Ecodur’s advantages is that, even with spudding, most coatings could not tackle this project.”

McCurdy continued, “For typical silicone applications, over a spudded roof, the steps would be as follows: spud – and I mean really spud. You would not want to leave a single piece of gravel behind. Apply acrylic, bleed blocking primer and this is where the project will most likely fail due to the gaps, cracks, etc left behind, remember A spudded surface will only be somewhat uniform, it will be difficult to control your mil thickness.

“Since most acrylics have a maximum per pass mil thickness of 12 mils, you will likely be over thick in multiple areas. If those areas reach over 16 mils, the acrylic will likely crack during curing. Nobody will notice this until long after the silicone has been applied, so as it cracks, it will crack the silicone with it.

McCurdy cautioned, “Also, at our company, we do not trust the adhesion of silicone to acrylic bleed blockers, so we would have an additional step of applying an epoxy primer before silicone. The mil thickness tolerances for epoxy primer are even tighter.

“If you managed to tackle all of these issues, there is still not a manufacturer that would warranty this application. For acrylic coatings, you begin with the same issue of cracking due to lack of ability to control the liquid applied thickness. I have seen it done, but I have never seen it succeed.”

He said that prior to the use of Ecodur, the only real solutions for a tar and gravel roofs were a complete re-roof with very messy tear off, single-ply with loose rocks still needing to be removed, though spudding is not necessary. However, there is costly insulation needed to protect the membrane from the remaining gravel. Another option would be poly spray foam, but that also requires spudding and is pretty expensive.

“By completing a tar and gravel project without spudding, we have proven several things: because Ecodur has no maximum mil thickness, we don’t have the limitations of traditional coatings. If necessary, we could flood valleys to create an even surface. Ecodur will out-perform on a spudded roof. If any gravel remains, it’s okay with Ecodur,” said McCurdy.

“If a roofer finds a situation where spudding is not a possibility (repair, uneven surface, etc) Ecodur will perform. When foamed, Ecodur creates a rounded barrier to protect the silicone from the jagged edges of the rocks, making it walk-able.

McCurdy concluded, “Another great advantage for Ecodur, as on previous projects where we have spudded, we have encountered some of the spudding issues such as gouges in the roof, down to the wood, big gaps left behind, etc. Luckily, these issues are easily handled with Ecodur.”